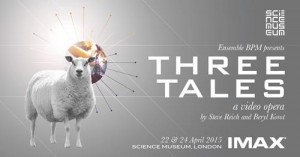 The work will be presented in association with a conference at the Institute of Historical Research entitled Being Modern: Science and Culture in the Early Twentieth Century, led by Dr Robert Bud, Chief Curator at the Science Museum. Performances take place on 22 and 24 April 2015 – the former date marking the centenary of the first use of chemical weapons in warfare.

Composed in 1998-2002, Three Tales recalls three events from twentieth-century history, exploring technology’s growing dominance in society: the crash of the Hindenburg zeppelin in 1937, nuclear bomb testing on Bikini Atoll in 1946-1958 and the cloning of Dolly the Sheep in 1996.

Ensemble BPM is only the second group to stage Three Tales since the work’s 2002 premiere. The production will be conducted by Artistic Director Nick Sutcliffe, directed by Matthew Eberhardt and produced by Amanda Carrick.

Ensemble BPM will be joined in performance by Synergy Vocals, the world-renowned vocal collective selected by Steve Reich to premiere the work in 2002, led by former Swingle Singer Micaela Haslam.

The production is supported by the Science Museum, Arts Council England, AHRC and The Hinrichsen Foundation.

10.00 Introduction to the study day – John Pymm, Chair of the Society for Minimalist Music.

Through the Lens of its Reception; Keith Potter (Goldsmiths, University of London)

3.00 Narrativity and the Voice

You are kindly invited to submit proposals for a one-day Conference on the music of Steve Reich, to be held at King’s Place, London, on Saturday 14 February, 2015 as part of a weekend of performances of music by Steve Reich, some of which will have the composer in attendance.

The conference aims to make accessible to concert-going audiences some of the latest research on Reich’s music, and contributions are welcomed in the form of individual papers (20 minutes) and themed sessions of 3-4 papers, as well as non-traditional sessions or events, such as poster sessions. For individual papers, abstracts containing a maximum of 400 words should be sent as email attachments, by 1 September, 2014, to the Secretary of the Society – kay.potter@hotmail.co.uk

For themed sessions, please collate abstracts for the constituent papers and a short abstract of the session theme into a single document and submit as above. The conference committee is also happy to consider presenting lecture-recitals.

Further details of the event are available at the King’s Place website.